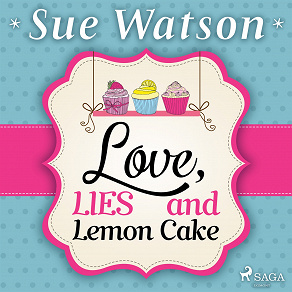 by Sue Watson
Love, Lies and Lemon Cake is a hilarious, bittersweet comedy about taking your life back before it’s too late.

Faye Dobson has lost her sparkle. Living on film star fantasies and vague memories of a marriage that once was, she can’t help feeling that life is passing her by. She dreams of being whisked to Paris for dinner, making three wishes at the Trevi fountain and having sex under the stars. But the wrinkles are multiplying, her husband’s passion is for plumbing, and the nearest she’ll get to Rome is a take-away pizza.

So when Faye meets Dan the gorgeous Australian surfer guy working in the local deli she can’t help but wonder what it would be like to see the world. He is blonde, tanned, ten years younger and bakes the most amazing lemon cake. Unlike her husband Dan actually listens to Faye, his smile makes her feel fizzy inside, and when he smiles... Oh. My. God.

But is Faye being silly? What would Dan see in someone like her? Even if he did have feelings for her, could she give up everything to be with him?

What people are saying about Sue Watson...

‘a talented chick lit author with fresh and unique voice and going on my list of all time faves.’ This Chick Reads

‘Love, Lies and Lemon Cake is a deliciously hilarious book that will have you laughing out loud and rooting for the new Faye! From vajazzled lady parts to fake bake, orange self-tanners, Sue Watson’s humour is brilliant and spot on! This is the perfect book for summer! Don’t walk, but run out and get this book. You will be glad that you did!’ Book Mama blog

'Sue’s writing is witty and heartfelt in just the right amounts.' One More Page

‘Sue has an absolutely amazing way of making you feel the emotions of her characters, and making you step into their shoes.’ Kim the Bookworm

Sue Watson was a journalist on women’s magazines and national newspapers before leaving it all behind for a career in TV. As a producer with the BBC she worked on garden makeovers, kitchen takeovers and daytime sofas – all the time making copious notes so that one day she might escape to the country and turn it all into a book. After much deliberation and copious consumption of cake, Sue eventually left her life in TV to write. After a very successful debut novel, Fat Girls and Fairy Cakes Sue signed a deal with Bookouture.
Listen to sample
Log in to borrow