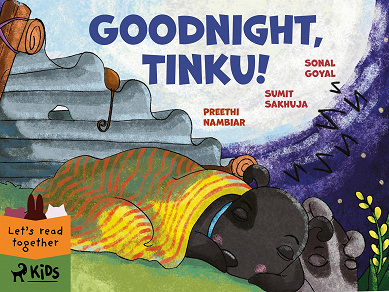 by Sonal Goyal ‚ Sumit Sakhuja ‚ Preethi Nambiar
Tinku lives on Mangu’s farm. One night he is the only animal on the whole farm who can’t fall asleep. No matter how much he twists and turns. But when he moves out into the night, he discovers there are others like him.

"Goodnight, Tinku!" was originally published by Pratham Books on the online platform StoryWeaver. Several of the stories are written by Indian authors and set on the other side of the world. In particular, the stories explore exciting topics such as scientific discoveries and how we can look after each other and our planet.